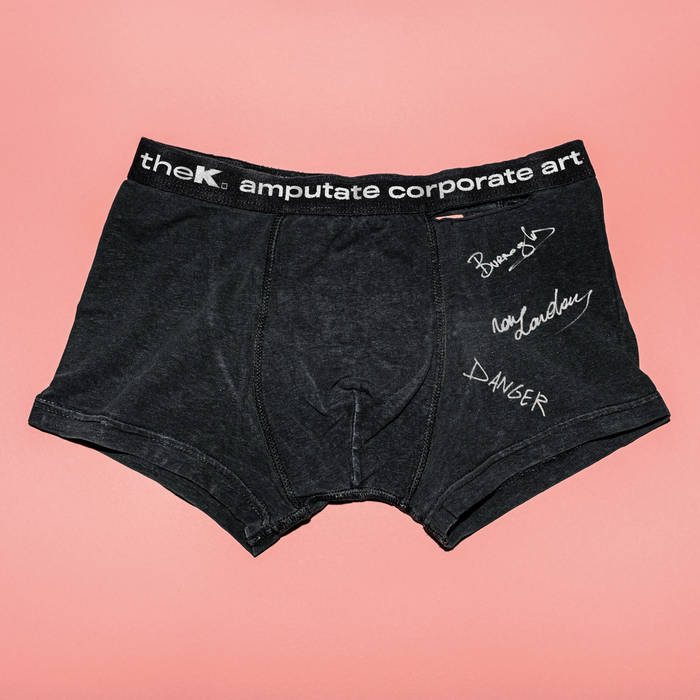 All songs written by The K. except "Shit Day", "Keep My Nightmares Cold" & "Swim It Better" written by S. Burroughs.

Rock band from Liège & Gent, influenced by ‘90s indie-rock bands, carrying that sound and work ethic further into the nillies. With a new line up and a brand new killer album “Amputate Corporate Art” the band perfectly fits te row of modern acts as Idles, Show Me The Body, Girl Band and Pissed Jeans to name a few. Merging noise-rock with a great taste for pop melodies makes their greatest force. ... more

Track Name: The Future Is Bright
We wander around. Missing our goal.
Only a few tried.

Some of us died of being controlled.
Only a few cried.

Life is cheap. Life is mean.
Sucking us dry ’til we bleed .
The sun sets right before us the future is bright

Gave up on our dreams. Not to be mean.
If only we could try

Living our life. As hard as it seems.
If only we could try.

Not to admit. No finger on it
And it’s dragging us down…
but with the sunset right before us the future is bright

The future is bright.

We wander around. Missing our goal.
Only a few tried

Some of us died of being controlled.
Only a few cried

The sun set before us. The future is bright.
Track Name: Shit Day
Should I wake up to do you right?
While I woke up to have a shit day

Should I wake up to do you right?
While I woke up to have a shit day

Oh Don’t we all have a fit?
Well I’m fitting right in
On our terms to exist

Should I wake up to do you right?
While I woke up to have a shit day

Nothing makes me feel alright
Yeah I woke up to have a shit day
Track Name: Human After All
We’re all human after all
We don’t know what we’re doing
I’ve had it
So rather than just keeping up
I’m standing my ground

We’re all human after all
Somehow we wilI get thru it.
I’m speechless
Our privilege enlightened
And nothing else but failure reflects in the mirror

When we fall I’m taking you along!

Had no intention but came seconds to late
Whatever I’ve done has been going to waste
Lost. Left in a breeze.
Whatever you want
Cause I will do what you please

Without a blink I’ve framed you right in
You’re out of luck while the deck is still fortuning me
You start to tear. I’ve wept for less
Now you watch I’ll give you my best

Doesn’t anyone love me?
Doesn’t anyone care?
Even if my life’s a joke
I’m here and I will do do do you some more
Track Name: Everything Hurts
It’s all the same with somebody else
The same old song over and over again
Everything is bright. Then everything bends

I sucked you in
I go on without you

You’re a bright kid, messing up
So don’t give me, no don’t you give me that look
Worked off my ass to fit
So I might benefit quick

Wait! Too long is too long
You might benefit quick

You’re all fucking up
While I’m topping up

I have my heart on hold
I keep my nightmares cold
So who are you to tell
You’re never loved, yeah what the hell?
You better love me quick

You better love me quick

You better love me quick

There’s only so much left to lose.

I’ve seen the floor
Yeah you praised it well
Why don’t you swim it better?
Go and swim it better!
Dive. Dive. Dive.
Go and swim it better !
Track Name: (Un)Fortunate Youth
Cheating me on. Breaking me down.
[I’m hearing]  “People changin'”.
Well, I don’t mind.
Enjoying the fun while it lasts,  I emphasise.
Time will set up boundaries between us and I think it is perfectly fine.

When I see you around.
Yes I'm flattered
But I can't commit now.

Bandcamp Daily  your guide to the world of Bandcamp

Featuring Gary Bartz, 5 years of Rhythm Section Intl and an LP of the week by Nicolas Jaar